Video Mental Coaching From Anywhere in the World - LEARN MORE!

Have you ever played a team that was so dominant you questioned your chances to pull out a victory?

Facing a team that has demonstrated dominance for a long period of time can cause many players to resign themselves to the predetermined fate of losing.

Let’s face it… if you play long enough, you will eventually run up against a basketball team that is bigger, faster, more talented and seems unbeatable.

How you approach these games is critical. A negative “roll-over-and-die” mentality guarantees poor results.

You need to approach these types of games with a mindset that gives you the best chance to succeed.

This is exactly the challenge facing the Oregon State Women’s basketball team. Oregon State is meeting UConn, one of the most dominant teams in the history of basketball, in the Final Four of the NCAA Tournament.

The record-setting Huskies are riding a 73 game winning streak as they head into their ninth straight Final Four with three consecutive National Championships under their belts.

Not only is UConn on a historic winning streak, the Huskies have dominated their first four opponents in the 2016 NCAA Tournament with an average margin of victory of just under 45-points.

Oregon State has a choice to make: They can mentally forfeit the game and concede the loss, or they can find a way to rise to the challenge.

By the tone of their comments, Oregon State is heading into the game with belief in their abilities to meet the challenges of battling tough opponents.

Head coach Scott Rueck commented how belief makes things possible after their Elite Eight victory against Baylor, a team that had only two losses during the regular season.

RUECK: “I think that this day signifies just anything is possible. It has to do with sports and the human spirit and that might be kind of deep, but that’s what this is, a group that believed when there was no reason to, to see themselves through a Final Four. It’s mind-blowing.”

When you believe, you work harder, you’re more focused and more likely to achieve your goals.

Oregon State senior guard Jamie Weisner also commented on the team’s positive mentality and the excitement of the challenge of facing the best.

WEISNER: “It’s fun to have UConn.That’s always been my dream. You know, to be the best, you’ve got to beat the best. We’ve been in this position; we’ve been doubted before. So we’ll just prepare and be ready for them.”

You construct your mentality by how you think of the athletic challenges you face.

You can fan the flames of negativity or you can allow the fire to fuel your performance by directing your thoughts, emotions and energy into a more positive approach.

The key to having the right mentality when competing against dominant teams:

Since your mentality is your creation, you should be an active participant by consciously choosing where to direct your thoughts. Find evidence to support that you have the chance to succeed.

Remind yourself that dominant teams still have to play the game and score more points than your team. Dominant teams also have off days. Think of the times you succeeded when you were the underdog.

If your team plays to its potential, you could pull off that upset, but you need to give yourself a chance and stay in the game mentally.

The right mentality gives you the best chance to compete and succeed. 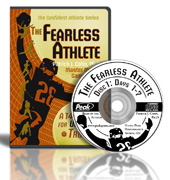 “The Confident Athlete workbook programs have worked absolutely wonderfully for me!  The quality of my shots has improved 1,000 percent, and my scores are consistently lower, by far!  Also, I have a sense of peace, and quality enjoyment of the game that had been sorely missing.  I love it!  Great work Dr. Cohn! Thank You!”
~Randy, golfer

“I’ll start by saying that the Mental Edge Workbook program is awesome. It put all the pieces together for my mental work with soccer players.”
~Eitan Azaria, Mental Coach for Soccer

“Dr. Cohn, we had a great season. We finished second in the State Tournament. We scored 163 points, which is 11 more than we scored the year we won the state tournament. We had three individual state champs. We really improved our mental preparation in the post season. The kids bought in and really worked at it. We will definitely need you again next year. Hopefully, you can help us reach our goals next year.”
~Coach Jim Bird, Head Coach Osceola High School