Video Mental Coaching From Anywhere in the World - GET COACHING!
You are here: Home / Sports Psychology Articles / How to Keep Fighting After a Poor Start to Competition 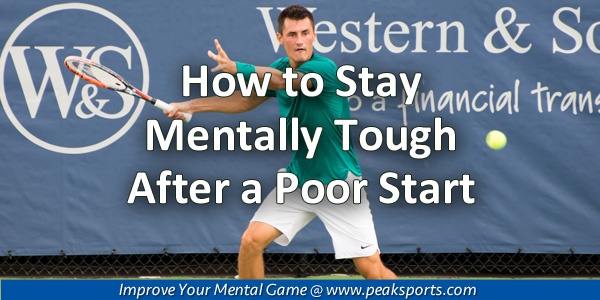 Staying Confident After A Slow Start

Every athlete at some point feels they don’t have “it” today in a competition.

You know the feeling, from the onset of a game or meet, you have difficulty getting psyched to compete. You start off slow or with mistakes and can’t seem to get into the flow of the game.

You feel your game is off and you are not exactly sure why. This experience probably sounds familiar…

Think of a time when you just didn’t have “it.” You probably realized quickly from the onset of the competition that your game was off.

How did you respond?

Did your mind run wild with negativity? Did you become angry or frustrated? Did you conclude, “This is not my day,” and resign yourself to just a bad day?

Many athletes who conclude, “I don’t have it,” take the ‘I’ out of ‘fight’ and mentally give up. The thought process is, “Since I don’t have it, there is nothing I can do about it, so why even try.”

When you start to think this way during competition, your self-fulfilling prophecy will turn into a poor performance.

Not all athletes respond in this negative manner…

Mentally tough athletes keep fighting even though they know that their performance will not be one of their top performances.

Being “off your game” does not cause mentally tough athletes to stop fighting.

On the contrary, when mentally tough athletes feel they don’t have it, they fight harder, dig deeper and compete tougher.

At this year’s Wimbledon, world No. 59 tennis player Bernard Tomic demonstrated the need for an athlete to be mentally tough when they have difficulty finding their game early in a competition.

After a lackluster first-round loss, 6-4, 6-3, 6-4, to 27th seed Mischa Zverev, Tomic first talked about not being able to get into the flow of the game.

TOMIC: “To me, this is one of the biggest tournaments in the world that I have done really well in my career and, yeah, I just couldn’t find anything.”

TOMIC: “I wasn’t mentally and physically there, with my mental state to perform and I don’t know why. But I felt a little bit bored out there to be completely honest with you. You know, I tried at the end and [Zverev] managed to win that set 6-3 or 6-4, but it was too late.”

There will always be ups and downs throughout a competition. If you can’t fight through the rough patches, you’ll be knocked out of the game at the first sign of adversity.

So when you don’t have it physically, that is the precise time when you need to pick it up mentally.

Mental Toughness Tip For Grinding it Out After a Poor Start:

Keeping the fight alive is your most valuable weapon when things aren’t clicking.

The ability to grind out your game for the rest of the competition is a sign that you can get the job done without your A-game.

Look for ways to change the momentum to get back into the competition. Maybe a good break, a positive call from an official, or a good play can turn it around for you.

Embrace the fact that you will struggle at times and be prepared mentally to grind it out–then you will always have a fighting chance.

Start by learning how to keep your confidence tank high with The Confident Athlete Audio and Workbook program.

Learn Mental Game Strategies to Boost Your Confidence in Sports!

If you’re an athlete who struggles with self-doubt, loses confidence, or cant take “practice confidence” to competition, The Confident Athlete is for you!

You can tap into my knowledge and experience to learn how to bring ultimate confidence to competition!

The Confident Athlete CD and workbook program consists of 2 audio CD’s that include 14 days of confidence fueling exercises and a simple to follow workbook that guides you through the 14 days, helps you apply the strategies and customizes the exercises to your personal needs.

Remember, confidence is a choice you make. You have to make a conscious effort to proactively seek confidence building thoughts and behaviors. Confident Athletes are proactive when it comes to confidence!

The Confident Athlete: A 14-Day Plan For Ultimate Self-Confidence

Take control of your mindset and performance today!

“Since I have been working with Dr. Cohn, I have noticed a dramatic improvement in my training and racing performance. Dr. Cohn has helped me to be much more confident in my racing and the results prove it! I look forward to your help as I move into the pro ranks.”
~Matt Boni, Motocross Champion

“First, I would like to thank you for the help given to me through your programs, ‘The Confident Athlete’ and ‘The Focused Athlete.’ I have made tremendous sacrifices though all these years to become a top Olympic Trap shooter but something was missing. This missing part was with my mental game. My scores increased tremendously in record time and other said that I was a different shooter.“
~Marios Kapodistria

“With the use of the The Fearless Athlete and Ultimate Sports Parent workbooks, I see subtle but significant results in a short period of time. My young athlete did not even know about positive self-talk until we started the program.”
~Adam, Sports Parent