Video Mental Coaching From Anywhere in the World - GET COACHING!
You are here: Home / Sports Psychology Articles / How Excuses Hurt Your Mindset in Sports 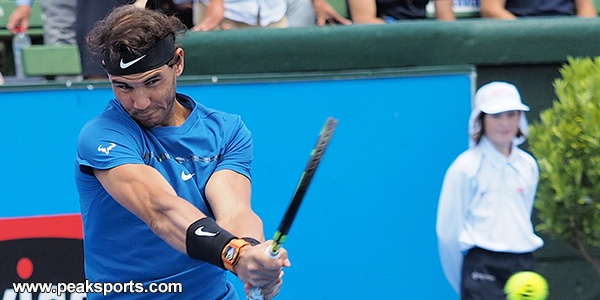 How to Overcome Excuses to Improve Performance in Sports

Excuses are the enemy of any athlete.

Excuses shrug off responsibility and place the blame for a lackluster performance on something (weather, bad competition site, faulty equipment) or someone else (teammate, bad official, unruly fans).

Take for example the following excuses, some of which may strike a chord with you:

Ultimately, excuses take control right from under your feet and give control to some force outside of yourself, leaving you a nervous wreck.

No athlete, in any sport, will perform well when they allow tough circumstances to dictate their actions in competition.

It’s been said that those that make excuses, seldom make anything else.

For this reason, you need a different approach when negative circumstances occur.

Excuses would have been easy for Rafael Nadal to make at the 2018 US Open.

Nadal was shut out in the first set 0-6 against Dominic Thiem.

These circumstances were relatively uncharted waters…

Nadal had only been shut out in the first set just the three times in nearly seven years.

The key for Nadal was to make a conscious choice to make adjustments rather than look for excuses.

NADAL: “I am the guy to look at myself. I needed to move forward, to change that dynamic, and I did. But the first step to change that dynamic is not to find an excuse on the racket or on the string or on something that is not the truth. The only truth is that you have to do things better to be able to fight for the point and fight for the match.”

Nadal knew if he was to turn things around, he would need to focus on making adjustments to his tactics and fight for every point, one by one.

You always have a choice: You can embrace excuses or you can fight for your potential.

So which will you fight for?

How to Overcome the Excuse Trap

Review past performances where you didn’t do as well as you wanted or those competitions where you gave less than best after some undesirable circumstances.

What were some of the excuses in your mind that held you back or made you give up?

How can you take full responsibility for your performance and take back control of the situation?

Mentally, put yourself back under those circumstances and visualize yourself responding as if you’re in control, not outside factors.

Choose to be problem solver rather than an excuse finder.

“I want to thank you for your attention with my son Keith, Jr. You helped him to focus his attention on the sequential steps necessary to make the most of his at-bats. Keith went on to have one of his best baseball seasons ever. He led his team in batting average, stolen bases, RBI, and runs scored. He ended the summer with serious interest from several Division I colleges and eventually signed a letter of intent to play for Pennsylvania State University. He received a partial baseball scholarship and is now on the roster. Thanks again for your help.”
~Keith M. Donnell Sr.

“Michelle had the best weekend of soccer she has ever played.  I’m not just saying this because you have been working with her (I promise!). She was relaxed, did not get frustrated with herself or teammates, never once ‘shut down’ and actually smiled a couple of times. Numerous parents noticed a difference in her composure and attitude.  A college coach sent an email last night expressing interest–commenting on her level of play during the weekend. Thanks again for EVERYTHING…Michelle is in a very good place right now!”
~Diana, Michelle’s Mother

“I am a Brazilian coach in Tempe, AZ. I am the vice-president of the Arizona State Brazillian Jiujitsue Federation, long story short, I would like to say that you have a great program; you have been able to help me and my competitors. My fiancee, Kristina Barlaan, who just won two medals at the 2012 World Championship has also mentioned your program as a big help.”
~Gustavo Dantas, Coach

“It was amazing!!! Before the show, I really felt like I was becoming the part. I was oddly calm, which concerned me because I thought my nerves might kick in on stage! But, they didn’t!  I stayed focused in each moment, and remained calm, and actually did the difficult tricks better than I ever have! My coaches were all so proud of me and the one who I know the best was marveling at my calm, poised manner throughout the ballet. They said it seemed like I was doing it for the 15th time, I looked so comfortable. This is the result of my work with you! You gave me the tools to tackle this huge mountain of a role, step by step! I am beyond happy!”
~Professional Ballerina