Video Mental Coaching From Anywhere in the World - GET COACHING!
You are here: Home / Sports Psychology Articles / Mental Preparation / Bench Your Expectations to Play Fearless Volleyball 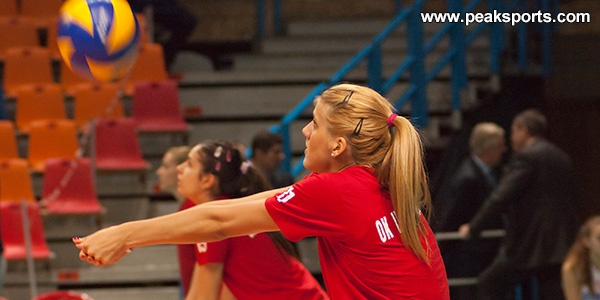 Do You Get Pregame Jitters?

Are you scared when you step on the court?

Do you fear making a mistake? Or being judged by others? Or being embarrassed if you mess up?

In the game, you could tell she was hesitant and playing with fear. This teammate did a lot of good things when she stepped on the floor, but the fear she portrayed on the court was holding her back.

After one game, I asked her what was going on, why she threw up before each game, and why she seemed to play with so much fear.

She told me she wanted to be respected and acknowledged like her sister had been. My teammate’s sister went to our college a few years earlier and held some records statistically for the school.

She told me that as soon as she committed she felt this enormous amount of pressure.

The expectations she had for herself and ones she thought others had for her were through the roof. She felt she had to follow in her sister’s footsteps and “live up” to her performance.

Even though my teammate and her sister played different positions, she believed she needed to match and even exceed records held by her sister.

She told me that each game mattered significantly to her statistically and she felt she had to be perfect while on the floor.

The pressure my teammate placed on herself was detrimental to her game. She had extremely high, strict expectations and she feared making mistakes because “each touch mattered statistically.”

My teammate felt judged each time she walked on the court. She needed others to see her the way she believed they viewed her sister.

As a result, this player struggled to play her game, let alone, her sister’s game.

Many volleyball players get them right before a match and they typically go away after warm-ups or the first couple of points in the first set.

Pregame jitters, or nerves can be beneficial to your game… if you perceive it that way.

They can get you pumped up and ready to play. You actually perform your best when you’re excited!

When you view pregame jitters as advantageous, they’ll be useful to your game.

If you continue to have “jitters,” or be fearful and anxious through an entire match, then you may have added pressure.

You might step onto the court with high expectations, scared to make a mistake, or thinking too much about the outcome and statistics.

One of the first strategies in overcoming this fear when you take the court is to leave your expectations in the locker room.

When you bench your expectations, you’re less judgmental of your performance.

The fastest way to improve your mental game is with personal mental coaching.

Find out more about our programs here:

You can work with Dr. Megan Melchiorre herself in Orlando, Florida or via Skype, FaceTime, or telephone. Call us toll free at 888-742-7225 or contact us for more information about the different coaching programs we offer!

You can learn more about our mental coaching programs for volleyball players here.