Video Mental Coaching From Anywhere in the World - GET COACHING!
You are here: Home / Sports Psychology Articles / Composure in Sports / How to Keep an Even Keel During Competition 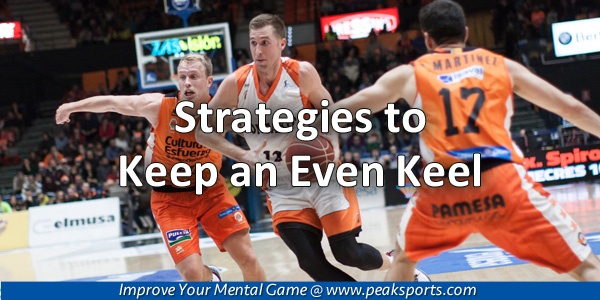 Maintaining an Emotional Balance for Athletes

It is not easy to control your emotions and maintain composure during a competition, although it’s extremely necessary if you are to continue developing your game…

There are many things that can knock you off your game:

“Even keel” refers to maintaining an emotional balance.

An even keel is when you don’t get too high when you are doing well and not getting too low when you hit rough patches during the competitive season.

Miami Heat point guard, Tyler Johnson, has dedicated much of his time in the NBA to learning to keep an even keel through the ups and downs of an 82 game season.

Johnson was overlooked by every team in the 2014 NBA draft…

As an undrafted rookie, Johnson played for the Miami Heat in the 2014 NBA Summer League. A few months later, Johnson was waived by the Heat and was chosen to play in the Development League.

Johnson has fought through two injuries (a broken jaw and shoulder injury) but, in 2016, Johnson signed a four-year 50 million dollar contract with the Heat.

Johnson knew if he was to take his game to the next level, he would need the ability to maintain an even-keel… And he has!

Each of his three seasons, Johnson has seen his minutes per game increase and he has responded by bettering his points per game each year with a career high average of 13.7 in his third year.

JOHNSON: “I think that’s probably the biggest thing I’ve been needing — the mental aspect of the game. I think physically I have the tools to be a really good player in this league. It’s just mentally staying with it. It’s such a long season. There’s going to be so many ups and downs, but all the great players talk about having that even-keel, not getting too high or too low on themselves. It’s something I’ve been working on.”

Just like Johnson has made the commitment to work on his mental game, you can too.

By taking the first step towards staying composed and emotionally balanced, you can be more productive and consistent throughout the season.

Tips to Keep an Even Keel During Competition:

Your outlook matters more than your in-look. If you are able to keep a positive perspective, you are in better position to play at your peak.

Athletes get in trouble when they turn inward and get tangled up in their intense emotions.

1. Recognize your triggers for negative emotions.

What sets you off? Do you get upset or down after mistakes, bad calls, or rude opponents?

2. Learn to change your reaction to these triggers.

For example, a bad call by an official is just a fact in which you don’t have be upset about. Change your reaction to change your emotion…

Instead of dwelling on “that’s unfair and will hurt my chances of winning,” you might change to: “That’s just one call over a long game. The refs decision is out of my control. Accept it an move on.”

3. To keep momentum on your side, keep your over excitement in check and keep playing the same game that got you into that position.

Start by learning how to overcome mistakes with “The Composed Athlete.” 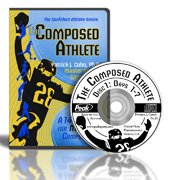 If you’re an athlete who wants to learn how to stop performance anxiety quickly, be poised, calm and in control during those “critical moments”, learn more about The Composed Athlete!

Powerful strategies for learning a composed mindset can be developed, but you must first strip away the mental ball and chains that prevent you from having instant composure when you need it.

How much better would you perform if you have total confidence and composure to perform your best in crunch-time?

The Composed Athlete CD and workbook program consists of 2 audio CD’s that include 14 days of composure boosting exercises and a simple to follow workbook that guides you through each of the 14 days, helps you apply the strategies, and customizes the exercises to your personal crunch-time challenges and coping with pressure.

The Composed Athlete: A 14-DAy Plan For Maximum Composure

“A big thanks to you Dr. Cohn! I just can’t get over how much of a wonderful resource you are Patrick for the mental game of motocross! Never in the history of sports have I had such an upper hand with your mental strategies!
~Nicky Labrecque, Motocross racer

“Thank you so much for taking the time to work with our team while we were down in Florida. The tips you gave about relaxation and releasing tension before we bat or do anything was very beneficial to me. I find that I even use it during my classes at school.
~Ann Miller, Softball player

“After your session with Tyler, he is hitting Awesome! He got his first out-of-the-park home run and is scoring lots of doubles. He has a totally new attitude thanks to you!”
–Debbie Hartman, Tyler’s Mother

“Dr. Cohn, we had a great season. We finished second in the State Tournament. We scored 163 points, which is 11 more than we scored the year we won the state tournament. We had three individual state champs. We really improved our mental preparation in the post season. The kids bought in and really worked at it. We will definitely need you again next year. Hopefully, you can help us reach our goals next year.”
~Coach Jim Bird, Head Coach Osceola High School

“My son Jake has struggled with composure for as long as I can remember. He is doing the Composed Athlete program and is about half way through. He had the biggest, most stressful wrestling tournament of his season this past weekend. I have never seen him demonstrate such composure and sportsmanship -ever. I was so happy I was fighting back tears. It’s been a long and frustrating road. I am so thankful for your program.”
~Laura Grogan